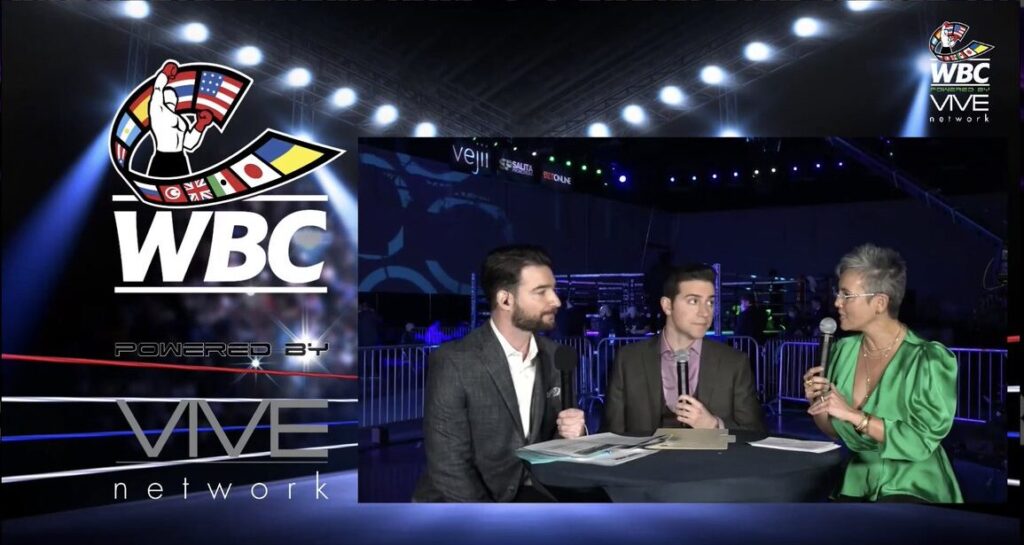 The World Boxing Council (WBC) and VIVE Network are working in unison to agglomerate the first-of-its-kind, round-the-clock professional boxing channel, WBC LIVE. The entertainment hub will debut in June 2021 and will for the most part – aside from pay-per-view events – stream free via the web and to connected devices worldwide. Programming will include weekly commentary shows, such as In The Ring, legacy content featuring infamous fights and fan favorites, as well as plenty of promotional content profiling upcoming fight cards and athletes.

As the pandemic of 2020 all but annihilated live sports, it served as the single greatest impetus for this massive undertaking. WBC and VIVE stepped into the professional promoters’ and athletes’ corner with a strategy to counter-punch venue closures and lost ticket sales. Backed by world-class broadcast and technology partners, WBC LIVE will empower promoters to stream and monetize more fight cards – both title and ‘regular season’ of various divisions and denominations – than ever in the highest quality without the cost prohibitive production price tag. VIVE Network has devised a plan to employ virtual production. The goal is to level the playing field for promoters of all scales by providing a platform to expose their talent in a more ubiquitous setting and propel their professional careers.

“Our mission is to provide professional boxing athletes and promoters the means to combat hindrances and sustain their livelihoods,” says John Jacaman, VIVE Network Director. “It’s the biggest thing to happen to the sport of professional boxing in years.”

The linear channel will appeal to sports fans with an appetite for premium broadcast events who own the multi-millions of UHD HDR-capable displays, yet have scarce access to UHD HDR entertainment. Fight fans around the globe eager to witness the action will be able to access VIVE’s free downloadable app available via various app ecosystems, including Amazon Fire TV, Apple TV, Google TV (Android TV), Roku Channel Store, and Smart TVs by June 2021.

“We are very excited to accomplish the dream that my father, José Sulaimán, pursued for many years: to spread the talent of young boxers from around the world, through the WBC LIVE Channel. Today, more than ever, we need to support promoters with innovative schemes within the WBC global platform,” says Mauricio Sulaimán, World Boxing Council President.

This joint initiative, referred to as WBC Consortium, will not only benefit the sport of boxing, but also its fans universally. Athletes and promoters keen to learn more about leveraging the universal live event platform, tapping into its collective audiences, and consequently expanding their notoriety and earning potential should write contact@wbcboxing.com or visit bit.ly/WBCconsortium. Broadcast outlets seeking consistent, high-quality professional boxing syndication should contact VIVE Network directly. Fight fans that want to stay in the know about the WBC LIVE launch, upcoming programs and events may subscribe to email and SMS notifications by visiting bit.ly/WBClivenews.

About World Boxing Council The World Boxing Council is Boxing’s elite sanctioning body and has as its maximum priority to work and protect for athlete’s safety and health inside and outside of the boxing ring. WBC rules which have revolutionized the sport of Boxing include reducing title fights from 15 to 12 rounds, the creation of divisions, and the requisite official 24-hour pre-fight weigh-ins among many others.

Founded by Adolfo López Mateos in 1963 with only 11 member nations, today the WBC is comprised of 165 countries from around the world and is headquartered in Mexico City. Some of its greatest champions are Muhammad Ali, Mike Tyson, Julio Cesar Chavez, Oscar de La Hoya, Sugar Ray Leonard, Floyd Mayweather, and Manny Pacquiao among others.